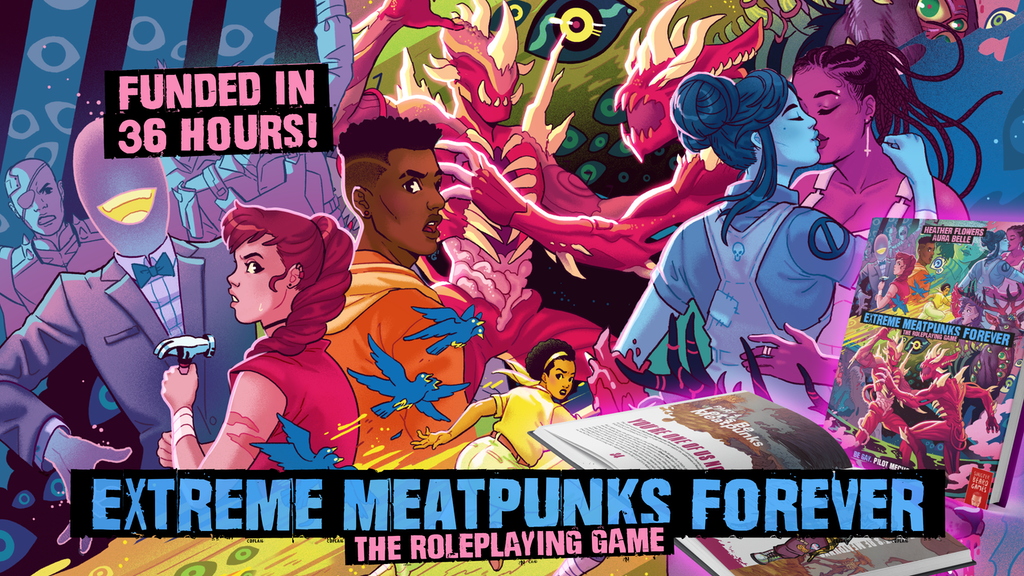 A tabletop RPG about found family, queerness and gigantic robots made of meat. Be gay. Pilot mechs. Kill Nazis.

Latest Updates from Our Project:

Greeting meatpunks one and all!

Things are progressing well despite capitalism's and the modern world's best efforts to kill us all! The revised and expanded rules are so close to being done that we can almost taste their burnt acrid secretions, and the world of... well, Meatworld... is expanding at a frankly alarming rate. You know that bit at the end of Society? And that bit at the end of Guardians of the Galaxy 2? Those, but mashed up, in tabletop rpg form.

Due to issues mentioned in the last update, plus, y'know, the ongoing global pandemic, we're running a bit behind our predicted schedule, but we're all back and running at full speed now. We're hoping to have the PDF version of the game with you some time in the Summer, probably around the anniversary of the Kickstarter campaign. If we can get it to you sooner, we absolutely will! Printed copies will follow afterwards.

We'd like to thank you in advance for your patience. We want to make sure you get the best, meatiest, punkiest game possible and we couldn't do that by rushing. In return, have some new art! Here is The Meatborn, a human who's become infected with meatagens and become somewhere between Tetsuo: The Iron Man and a full English breakfast.

We hope you're having a better day than they are!

Love and kisses, The Meatpunks Team

* Your radio sputters back into life after a long while gathering dust, the chitin antenna twitching above its bone speaker, the meat wires inside pulsating rhythmically *

Hello? You all still there? Can you hear me?

Apologies for the long delay in between updates. I assure you we've been working on stuff! But real life has an unfortunate way of kicking you when you're not looking, and sadly two of the core Meatpunks team suffered deaths in the family in the weeks after the project funded, and there was a period of illness leading up to that. So we're a little bit behind where we'd want to be, but not in any way we're worried about, we plan contingency into our timings for this sort of thing.

In terms of new rules, we've got extended GM rules including full examples of GM moves, advice of hard and soft rules, play examples and NPC creation, which we're calling "making up a guy and getting mad at him", plus a whole bunch of monsters and new playbooks. And we've got pictures of some of them! Here, have a look!

Thank you so much to every one of our 928 backers who helped us raise over 200% of our fairly ambitious goal! You all rock and have made us all very happy, even those of us who don't exist. We're now going to begin the arduous process of rounding up all the promotional meat mechs we sent out into the world and beginning the press campaign to explain that yes, while they did destroy many buildings and two bridges, they looked bitchin' doing it. We will also be finishing the book.

See you soon with more updates and until then, remember: be gay, pilot mechs, kill Nazis. And also: MEAT.

You've gone gone and done it again, despite all warnings and ignored omens, and we've reached our first stretch goal! EXTREME MEATPUNKS FOREVER: The Roleplaying Game will now feature printed end papers featuring some of our fabulous art so you know you've got a really classy book in your hands. If you've been thinking about upgrading from pdf to a hardcover, now's a great time to say, hey this hardcover I upgraded to also has printed end papers!

That also means we can announce our first mystery stretch goal, which will be... Meatworld Diaries, a series of short stories exclusive to backers, written by Heather Flowers and featuring the Meatsonas of backers at the Meatsona and Extremely Limited Meatpunks levels. We'll unlock that at £65,000, but next onto spot varnish for the cover at £35,000!

Love and kisses, The Meatpunks Team.

We've got an exciting new pledge level that's just been made available for those of you who don't have quite enough meat spattered on your walls - at the ArtPunk pledge level, you can get both the hardcover book and a super-limited edition A1 poster of Paulina Ganucheau's fantastic cover art. Only 100 of these posters will ever be made. Here's one hung in a post-brutalist gallery and totally not just a very quick Photoshop*.

Look at that! Imagine that hanging on your wall. You'll be the envy of all the other punks, meat or otherwise.

To get the poster and the hardback, just back at the ArtPunk pledge level for around $69 which, as I think we all can agree, is nice. Because this pledge level is limited, we can't offer a separate Solidarity award, but for every £10 you donate over the base cost, we'll donate 2 copies of the pdf to the community pile!

As long as they don't sell out, the posters will also be available in the Backerkit store as an addon if you're backing at a PDF level or one of the super special levels but one to pick one up.

* Artists rendition, for example purposes only, design may change yada yada, but basically this is what it will look like.